Ranked at the top of Rolling Stone’s list of  "The greatest singers of all time",Aretha Franklin is famous for blessing the world with her blues, jazz and gospel tunes.

On June 21st, “The Queen of Soul” was packing in her hotel room and ended up tripping over the spike of her Jimmy Choo high-heeled shoes, injuring her left 2nd toe.  The next day she reported her toe was still in pain and throbbing. She was sent for x-rays, which revealed a fracture. 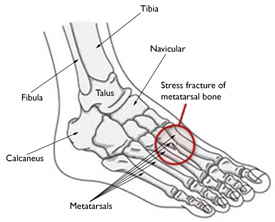 Aretha was placed in an orthopedic boot, which she was said to be disappointed with since it didn’t match her wardrobe! She continued to perform in her boot for a show in New York.

She has the most common cause of foot pain-a metatarsal stress fracture, which is also called a “March fracture” because pain increases with activity specifically seen in solider recruits.  These types of fractures need time to heal properly to avoid surgical intervention.

An x-ray will be taken and a hairline crack will be seen in one of the metatarsals (foot bones).  Treatment includes rest for 6-8 weeks usually in a stiff orthopedic boot.  For more severe fractures, a non-weight bearing cast will be used for more than a month to aid the healing process.

If the bones are severely out of place or in an area of poor blood supply then surgery will be needed.
Posted by Dr. Raj at 2:14 PM