AN EXERCISE IN ORTHOPEDICS: Bon Jovi Injures Knee during Concert

Well known for being the lead singer of the popular rock band with his last name as its brand, Jon Bon Jovi has sold over 130 million records worldwide and continues to play sold-out shows around the world. 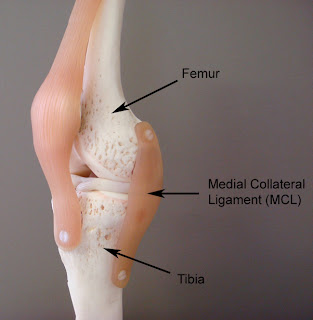 While performing a summer concert in Finland, the singer's knee gave out and he felt something tear. It had been pouring rain outside, yet he continued the show with his knee in severe pain.

His MRI showed a torn medical collateral ligament  (MCL) and was operated on July 1st in Dublin, Ireland. Luckily, he had the week off, and now hopes to continue his tour with a stop in Istanbul, Turkey eight days following his injury.
The MCL is one of the 4 main ligaments connecting the knee bones, and runs along the inner part of the knee preventing it from bending inward. It is usually injured when the outside of the knee is struck, causing the knee to buckle. When stretched too far, the fibrous ligament begins to tear. The most common symptom is severe pain and generalized joint swelling the following day.
Most often, these tears are small enough (grade 1 or 2) to be treated conservatively with physical therapy and a knee brace for stability. In some cases, the tear is severe enough (grade 3) to require surgical repair. Jon should heal well and be back to his normal superstar self!
Posted by Dr. Raj at 1:28 PM