In 2008, Donovan Ricketts joined the Los Angeles Galaxy from Jamaica, and today is the reigning goalkeeper of the MLS.
During a game on June 27th, Ricketts suffered an arm injury early in the scoreless tie against the San Jose Earthquakes. He collided with one of his opponents and was taken out of the game. 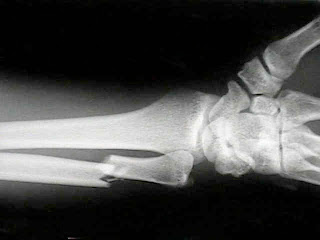 He was sent for x-rays, which showed a fractured left ulna. The next day he underwent surgery, and isexpected to recover in 4-6 weeks.
The ulna makes up one of the two bones on the left side of the forearm. The most common cause of an ulna fracture is from the forearm being struck by an object, in Donovan’s case –another player. A fracture of the ulna shaft is called a nightstick fracture.

Donovan most likely complained of pain, swelling, and possible abrasions with the trauma. If there is a significant amount of displacement, then the fracture is considered unstable.

Surgical intervention (open reduction and internal fixation) is required to stabilize the bones with a plate and screws. A period of immobilization will be needed to allow the bones to heal in place.

Donovan should be back to defending goals in 3 months!
Posted by Dr. Raj at 1:25 PM