AN EXERCISE IN ORTHOPEDICS: Moto-X Star Travis Pastrana Out Until 2012

Motocross champion and stunt performer Travis Pastrana continues to return to the X-games to compete for more gold metals. Travis was invited to drive a car in the NASCAR nationwide series, but will need to postpone his appearance until next year, due to his injury during a stunt at this summer’s X-games in Los Angeles.
On Thursday, July 28th at the X-games 17 Best Trick Event, Travis was attempting to perform his signature stunt called “the toilet paper roll.” This trick involves Travis propelling from a steep ramp while back flipping on his motorcycle during an off-axis spin with a 720-degree rotation.

Unfortunately, Travis landed on his leg while the motorcycle fell on top. He was taken off on a stretcher to the sidelines and sent for X-rays. 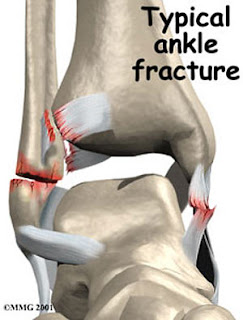 The X-rays revealed fractures of both his right foot and ankle. Since the fractures required surgical repair, Travis was in the operating room a week later. The surgery was a success but will require Travis to sit out for the rest of the year. He is to follow a strict healing process without putting weight on his right leg for one month.

Travis suffers from the most common type of motocross injury, which include the legs and ankle.  The ankle consists of 3 bones- tibia (shin bone), fibula (small bone on the outside of the ankle) and the talus (heel). Travis would have felt immediate and severe pain along with swelling, bruising, and instability.

Getting Back on the Track

Depending upon where the fracture was in each bone determines the treatment. Surgical repair is used to make the ankle stable. Using a plate and screws on the side of the bone or a screw or rod inside the bone, which may be used to re-align the bone fragments and keep them together as they heal, stabilizes the bone.

The bones will take at least 6 weeks to heal properly. Physical therapy and home exercises will speed the recovery process and get Travis back in shape for next year!
Posted by Dr. Raj at 9:41 AM