Although a comedian well-known for a variety of shows, Drew Carey currently hosts the famous game show, The Price is Right. And while he thinks nobody can replace Bob Barker, he took over his role in 2007 and continues to make audiences laugh with his variety of successful TV and comedy show appearances. 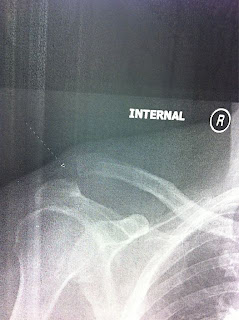 According to Drew’s Twitter account on Tuesday, August 16th, he injured his collarbone when he fell during a morning jog.  He went to a local hospital to be x-rayed. The x-ray showed a separated clavicle. Unfortunately, Drew had to cancel the game show taping for the day. He reported that all his injury will need is time to heal and plenty of ice. In this case, no surgery is needed.

A separation of the shoulder occurs when the collarbone (clavicle) separates from the shoulder joint (acromioclavicaular joint) and shoulder blade (scalpula). One of the most common ways for this injury to happen is falling on an outstretched hand. Drew most likely felt severe pain, swelling, and bruising.

The Recovery i$ Right!

There are six grades of shoulder separations depending on the degree of severity.  Type I and II only require conservative care including rest (sometimes with a sling), oral anti-inflammatory medications and ice every 4 hours for a period of 15 minutes. This should be done for several days until the swelling around the joint subsides.


Surgical repair is required in the more severe types where the ligaments need to be reconstructed to hold the top of the shoulder in place or stabilize the clavicle. Luckily in Drew’s situation, he was back to hosting the game show the following day!
Posted by Dr. Raj at 9:09 AM