AN EXERCISE IN ORTHOPEDICS: British Star Rocks Boot at VMAs

Jessica Ellen Cornish, better known by her stage name - Jessie J - is an R&B and soul artist from the UK, who rocked the stage as the house band at the annual MTV Video Music Awards in Los Angeles on Sunday, August 28th. 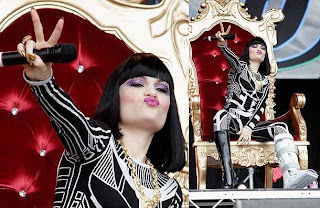 Just breaking into the music scene in the US, Jessie J is currently at the top of the UK singles charts.  During the show, Jessie J gave the performance while sitting down with a decorated cam boot. The audience can also see her being interviewed leaning on glittery crutches.

In June, Jessie J was at rehearsal for an upcoming show when she got injured. Unfortunately, during a dance routine, she fell off the stage and fractured her foot and ankle- in two places.

The Breakdown from DR. RAJ

The fracture was severe enough to require surgery, which she had a week later. After surgery, she sports the cam boot and crutches that VMA viewers saw on Sunday.

Fractures of the feet can range in severity. In most cases, they do not require surgery-- only rest. However, in Jessie J’s case, the bones were severely out of place and in an area of poor blood supply, where surgery was needed. Afterwards, a non-weight bearing cast will be used for more than a month to aid the healing process.

The injury certainly didn’t stop this rising star though- she continues to perform all her shows sitting on gold thrones, and not disappointing her fans!
Posted by Dr. Raj at 12:55 PM