Kobe injured his wrist in a preseason game versus the Clippers when he awkwardly fell on an outstretched arm. 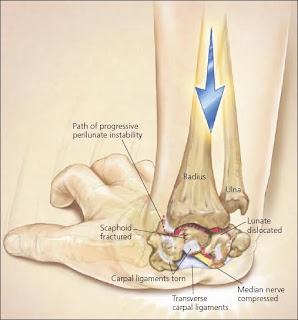 He sustained a rare injury called a lunotriquetral ligament tear.

This is better prognostically than a scapholunate tear.
The assumption is that he is playing as if the bones were aligned. If they were not aligned, this would be a big issue and would lead to immediate surgery. The main issue in a case of this nature is that he is still playing.
The average person would be casted for 6 to 12 weeks for the ligament to heal.  Since he is still playing, he is decreasing the chances of this ligament to fully heal and increasing his chances for future instability and arthritis in his wrist.
TMZ reports that he is getting numbing shots before each game and in fact had a few 40 point games.

But only time will tell the prognosis of this injury . In the interim, we watch this famous athelte impress us day in and day out.